IBM’s Weather Company Has A Path To Billions In New Revenue, Thanks To The Rise Of The Subscription Economy

Get all your Subscription Economy news wrapped up weekly for a quick read.

Weather is free, right? So why would anyone pay for a subscription to a weather service?

40 billion times a day more than 2.5 billion devices ping IBM’s servers for weather updates. A year ago, almost all of those updates were paid for by advertising and partnership deals.

And the change parallels the massive rise of the subscription economy.

Today nearly a million people who previously got their weather updates for free from The Weather Company pay IBM $30/year to get no ads, premium radar forecasts, more granular weather predictions, and other data. The Weather Company launched its subscription service in the teeth of the Covid-19 pandemic and has now grown it to more than 900,000 paying subscribers. Growth is especially fast during major weather emergencies: Hurricane Marco and Hurricane Laura accounted for 1% of new subscriptions on TWCo in just five days last summer.

Plus other benefits, of course.

Both for customers … and for companies like The Weather Company that grow subscriptions.

Over the past decade the subscription economy has grown five to eight times faster than traditional businesses, according to a report by Subscribed Institute and Zuora. While the S&P 500 Sales Index is up around 130%, subscription economy companies have grown almost 450%. That’s Netflix, sure, and Disney+, but it’s also cleaning services, transportation, games, clothing, meal kits, and more. By some studies, four out of five adults are currently participating in the subscription economy: receiving goods and services on a regular basis for a regular fee. 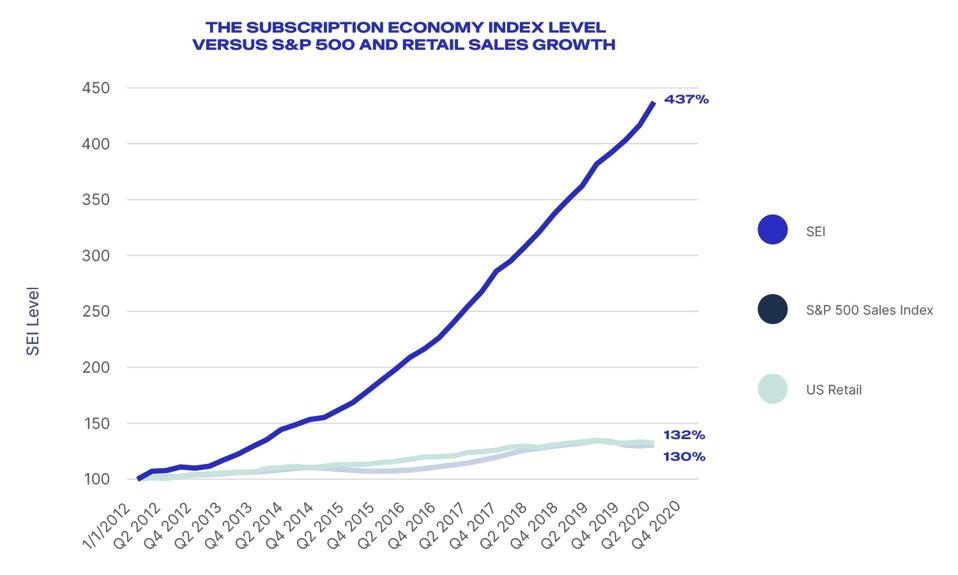 Given the growth of the model — it’s no surprise that most apps, services, and products companies that are looking for ways to grow are exploring subscriptions.

IBM’s Weather Company delivers weather news via owned channels like The Weather Channel app to 400 million people every single month. Add in licensing partnerships with some of the biggest companies on the planet who deliver weather news to their users, and that 400 million balloons to more than 2.5 billion devices that request information 40 billion times a day from the Weather Company.

Not all of those are going to become subscribers, of course.

But some will, and subscribers are more valuable than ad-viewing users, Bachstein says.

Just 10% of those 400 million owned-channel users becoming subscribers would balloon revenue by $1.6 billion dollars. That’s material even for a company of IBM’s size ($74 billion in revenue in 2020). Expand the franchise to just a few of the additional billion-plus people who are accessing IBM’s weather data in other people’s apps and services, and you might be able to put a 3-5X multiple on that $1.6 billion.

Already that revenue potential enabled The Weather Company to grow 3X year over year in 2020, a company representative told me.

The growth of the subscription economy is good news for companies that rely on ad revenue, because targeting ads to people is getting harder. Tracking people’s activity and interests is becoming more challenging as Apple is tightening privacy regulations on iPhones and third-party cookies go away. Advertisers will still advertise, and publishers will still make money, but the amount of available revenue might dip. Apple’s privacy changes alone could cost Facebook and Google billions of dollars in the next year.

So publishers have to make up the revenue somewhere.

Which, by all accounts, are hooking more and more people. 78% of adults in countries like the U.S., the UK, Germany, Japan, China, and France participate in the subscription economy. And three quarters of us think it will continue to grow.

Even among people who are anti-subscription (as I was before Netflix, and Amazon Prime, and Disney+, and Apple TV+, and I’m not sure what else).

“Someone on my own team who is in product said ‘I’m not going to subscribe to this premium service until I have to,’” Bachstein told me. “A big storm came … and he became a subscriber because he wanted that detailed information that the map had … he wanted to really understand the movement of the storm. So I hooked him. It took me like six months, but we finally hooked him.”

Not everyone will go there, of course. And that’s fine.

But more and more are like the CEO of Binance, a major cryptocurrency exchange.

“I don’t have a car,” Binance CEO Changpeng Zhao told Bloomberg recently. “I don’t have a house. The problem with cars, houses, is that I just don’t think they’re liquid. As soon as you buy them, you can’t trade out of them that easily … I actually prefer not to own anything.”

I won’t go there: I do prefer to own a few things that can’t be taken away. A house, for one, and probably a car too, although that could change. But clearly at least some others feel very differently about models of ownership and access.

For weather: I’m not sure. Maybe when I have to leave the home office in a few months and experience more of it.

This article was written by John Koetsier from Forbes and was legally licensed through the Industry Dive publisher network. Please direct all licensing questions to [email protected].